Skip to content
In my 33 years in the restaurant business, the health and welfare of our customers have always been our #1 priority. JAYS2GO adheres to the strictest standards for food safety, sanitation, kitchen hygiene, and social distancing. When handling and delivering food, disposable gloves are worn at all times; cutting boards and food surfaces are washed and sanitized multiple times during the shift and safe food handling, cooking and storage procedures are rigorously followed. In the age of COVID-19, it is understandable to feel anxious and unsettled. But please know that JAYS2GO pledges to take care of you, and your loved ones. It’s a promise I’ve made to my customers for over three decades, and I intend to keep that promise. Thank you for your support, and be safe. — Jay Solomon

Brazilian Shrimp Stew (known as Moqueca De Camaro) is a delectable one-pot meal featuring a fragrant coconut broth enhanced with stewed tomatoes, sauteed peppers, onions, celery, and garlic, and seasoned with lime juice, parsley, cilantro, paprika, and cumin, and fortified with brown rice. Sort of like gumbo, but with coconut and a lemony-lime twist. Bom apetite! 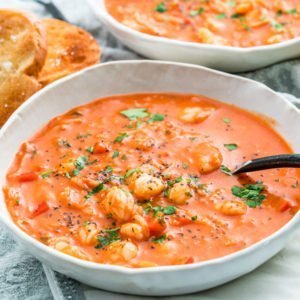 Only 2 left in stock